In the weeks leading up to—and after—the 2016 Presidential election, I was glued to Facebook and my news feeds, incapable of turning away from the slow-moving train wreck. 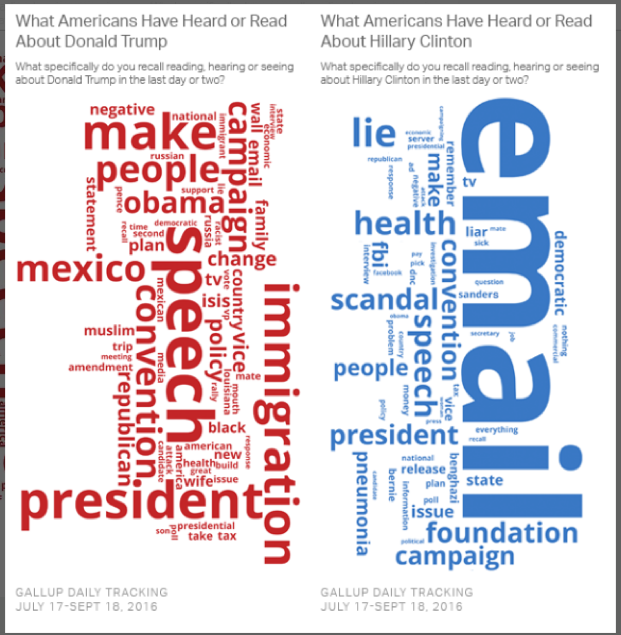 I watched the spectacle of Hillary’s many “controversies,” emerging from little substance to assume fantastical proportions, the impact of which is beautifully captured in the accompanying word cloud at right.

I gaped at the non-stop revelations from team Trump—the Access Hollywood tape, the Russian server connections, Trump’s personal attacks on a military family and former beauty queen, his dismal debate performances—any one of which would have sunk another candidate, but which together seemed to render him more buoyant and durable.

And then, on November 8, Trump won the presidency.

Over the last several months, I’ve read more insightful, thoughtful and well-reasoned analyses of the 2016 election and its fallout than I can count, trying to make sense of what still feels like a barely believable movie script.

I read about how primed the US was for an authoritarian regime and self-destruction (here, and here); the “deep story” that underpins anti-government hostility in rural America; how conservatives are more likely to fall for fake news; how Democrats failed to advance the interests of white, working class voters; the role of sexism in turning voters against Hillary Clinton; the role of class and wealth distribution in the election; the ineffectiveness of shaming Trump voters; insights into Trump’s likely narcissistic personality disorder; how to turn Trump into a loser; and tips for opposing Trump.

I wish I could say I now have a clear understanding of what happened and where we go from here. Instead, my inquiry has felt like a protracted bout of intellectual wallowing. Each time I think I’ve reached clarity, a new horror sends me back into the murk.

Ultimately, I don’t know what to do with the fact that Republicans and Team Trump broke every rule—and won the whole show. They insulted, pandered, lied and capitulated—and gained the Presidency and the Congress.

We just watched the playground bully get a prize for terrorizing and harassing the rest of the students.

That’s a hard reality to accept. I instinctively don’t want us to draw lessons from it: It may be effective to lie, cheat and steal, but we must reject that path—unequivocally. “They go low, we go high,” may not have worked this time around, but it’s still the right thing to do.

Over the last few weeks, as we turned the corner into 2017, I’ve realized that the 2016 election may never make sense—to me at least. And while I can’t say I’m at peace with that, it’s at least allowed me to stop wallowing and focus on where we go from here.

As a communications consultant with a social change nonprofit, my job is to help advocates and campaigners leverage communications strategies and tactics to achieve progress on the path to sustainability and justice. With the prospect of relentless attacks on the things we care about over the next four years, we need to be ruthlessly smart about how we deploy our scarce communications resources.

With that in mind, this post is focused on sharing three pieces of advice, based on some of the conversations I’ve been having with advocates across the country, all of whom are trying to figure out how to operate in the era of Trump:

Most social change advocates would probably agree that very little progress is likely to be made at the federal level under a Trump Administration. Instead, the game will turn to cities and states. Our communications strategies and tactics need to correspond with that focus. Instead of wasting time trying to move—or respond to—a Trump Administration that may have very little impact on your campaigns, stay focused on what you are trying to accomplish and the audiences who can give you what you want.

And if you do need to move Trump, good luck with that. Jokes aside, I would start with some focused power mapping and audience research to determine what—if anything—is going to work, and develop your strategies accordingly.

Above image by Max Goldberg from USA – Trump CAUCUS, CC BY 2.0