Facebook’s new rules: what all nonprofits need to know about political ads

Why the new rules?

Two-thirds of American adults are getting “at least some of their news” from social media. Platforms like Facebook have proven effective at spreading public messages and promoting causes. Nowadays, using promoted Facebook posts or ads is critical for organizations to reach a broader audience or amplify a campaign. Advertisers can easily target audiences based on age, demographics, and other interests helping organizations tailor their campaigns in ways that were never affordable or even possible before social media. However, the legitimacy of social media as fair platforms for free speech has been called into question in the past few years. If wealthy, subversive forces can pay to have their messages spread, how do we make sure they are held accountable?

With the Russian ad scandal surrounding the 2016 election, it became clear how vulnerable and powerful a platform social media can be. Facebook allowed foreign influences to manipulate the American political conversation with minimal oversight. The Democrats of the House Intelligence committee released in May 2018 more than 3,500 of the Facebook ads paid for by Russian influences who sought to divide the nation prior to the 2016 presidential election. Something had to change.

Facebook has taken some responsibility for the proliferation of these ads, acknowledging that it is necessary to restrict the use of political advertisement on an online platform in order to preserve its authenticity. In May 2018, Facebook implemented new rules for sponsor disclosures on political ads. This is where nonprofits need to read closely — the provisions for what is deemed “political” are remarkably broad. The company defines a political ad as any paid promotion that: 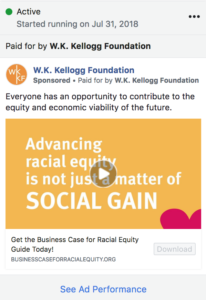 And here’s the catch: “any national issue of legislative importance” is a very broad category — perhaps too broad. These issues include, among others: civil rights, crime, the economy, the environment, poverty, and values. Ads under these criteria are required to prominently display a “paid for by” disclaimer, and advertisers now need to provide proof of their location and identity. These policies are aimed at increasing the level of transparency about how ads are paid for and distributed, in an effort to prevent any further illegal use of the platform (unfortunately, these rules don’t seem to have solved the problem yet). There is also now a searchable database of any ads with political content. Hopefully, these policies help make Facebook a more secure and authentic place for political discourse, but along the way, these new policies will affect the way nearly all nonprofits pursue their public outreach work even for organizations that don’t view themselves as political.

How do I get verified?

In order to become authorized to place Facebook ads with political content, organizations need to undergo an in-depth process that will verify their identity: including providing a social security number, address, and other information. The steps are as follows:

Next, nonprofits will need to link their ad accounts to this verified user profile.

It’s important for nonprofits to consider the implications of these new Facebook security policies and begin the verification process if they think they will ever need to place a Facebook ad. The set-up period may take a few weeks, and so it is a good idea to get started even before it seems imminently necessary. These new rules raise important questions about how political content should be regulated by platforms in an increasingly digital world. The boundaries between what is “political” and what is not are more blurry than ever and nonprofits have a key role to play in this continued conversation.