Are you planning some website ads or Facebook post promotion in 2015 to try to reach beyond your group’s base, maybe expand your list a little or motivate some broader participation in an online action? I’ve taken a look back at three online ad projects we ran in 2014 to pull out a few lessons learned from our experiences and the experiments we ran along the way to compare different images and appeals. Here are three takeaways:

#1. Use images that are local, real, & recognizable for your audience

We recognize real when we see it. And when an image is authentic to our audience — showing an actual experience, event, place or person our audience can relate to — then we have a better shot at sparking the emotional reaction needed to spur actions like sharing a post or completing a requested online ask. On the other hand, when an image can be perceived by viewers as generic — one that could be of “anyone” or “anywhere” — engagement tends to lag.

So could that scenic shot you’ve selected be “any river” — or is it a local river identifiable and important to your audience? Could that person in your photo be seen as “anyone, anywhere” — or is there context in the image that makes them real rather than generic to your audience? The image shown above of the man with rooftop solar panels is an example of an authentic image for residents living in the Salt Lake City area where we used it. For residents there, the view shown is easy to recognize, making the image unquestionably real and local on just a quick glance. For those inclined toward clean energy, or energy choice or independence, that local authenticity can help trigger stronger identification and feeling.

Indeed, promoted Facebook posts we created together with HEAL Utah using the rooftop image above performed much better than versions we tried with solar-themed images that could be perceived as more generic. And one version with the photo that included brief text overlay (“A new FEE on rooftop solar owners?!”) about an attack on solar by the local utility produced the highest rates of Facebook sharing and online action-taking of any online ad we tried anywhere all year long. Three-quarters of those who clicked on the post went on to complete a “customer satisfaction survey” in which they learned about their utility’s energy policies and expressed their views. 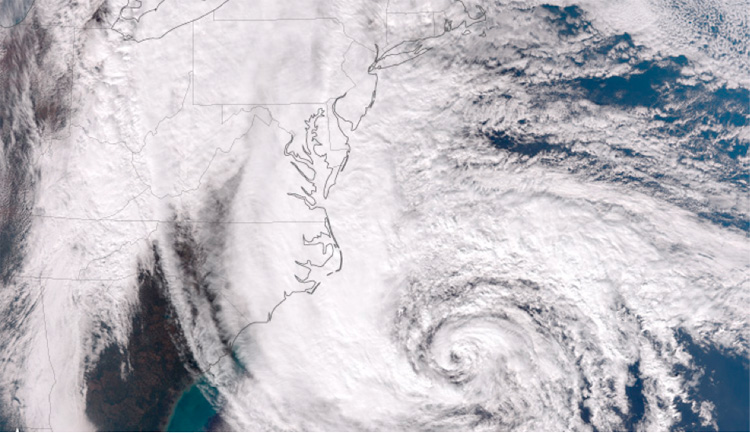 #2. Pick images with a clear, “nonstop” connection to your issue and action ask

This can be harder than it sounds. In some of our online ad projects this year we selected images that to us connected very obviously to the action ask — like showing a photo of a proud fisherman with his catch in order to inspire action to protect a river from coal pollution. Or, in the New York City area, using a photo of a subway stuck in a flooded tunnel to try to inspire participation in a Green for All online survey about community concerns related to increasing extreme weather due to climate change. While in both cases these ads did well at drawing viewers to click, in both cases they did not do as well at leading to participation in the online actions.

We might think that the text we pair with our images should address this problem by connecting the dots for viewers or spelling out what the topic is. But images are primary, and especially on quick-glance people may be deciding whether to click or not very quickly based significantly on the image. In the project to encourage participation in the survey on concerns related to extreme weather impacts, ominous images of severe storms local to our audience (like the hurricane aerial shown above) led to higher completion rates than the storm damage images we tried. There’s more research needed here — like trying storm aftermath images that are more obviously identified with a recent extreme storm — but the principle that’s emerging is this: if you’re going for online action-taking with promoted posts or ads to a new audience beyond your base, try to pick images that don’t require viewers to connect dots to arrive at your action ask. And be careful of those pictures that could provoke interest for reasons very unrelated to the topic of your action request. 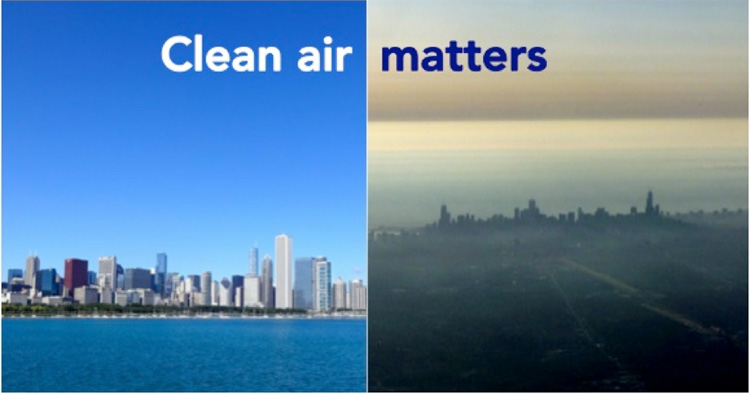 #3. Try creating contrast — either on the “page” or in the mind’s eye

Throughout the year, we saw steady success with visuals that use juxtaposition. The side-by-side approach shown above proved effective in Facebook post promotion efforts in multiple cities around the country where air pollution is a concern (always using images local to the audience of course). They led to consistently decent click-rates and action-taking rates on asks related to pollution associated with energy choices. In image-testing focus groups, we’d heard from participants that contrasting image combinations, such as before-after pairings, stood out to them and were memorable and compelling. Now we’ve seen experimental evidence in real-world campaigns that side-by-sides can work to spur engagement.

And what if you don’t have all the images you need to do an effective side-by-side? Maybe the “after” hasn’t happened yet, or the “after” is what you’re trying to protect against? We’ve found that you can still create effective juxtaposition by using one photo with a words of text overlay that makes the viewer “see” the contrast in their mind’s eye. Consider the image with text overlay below that proved effective. What happens? You imagine the river filled with big coal barges, creating an impactful contrast in your mind’s eye to the scene shown. 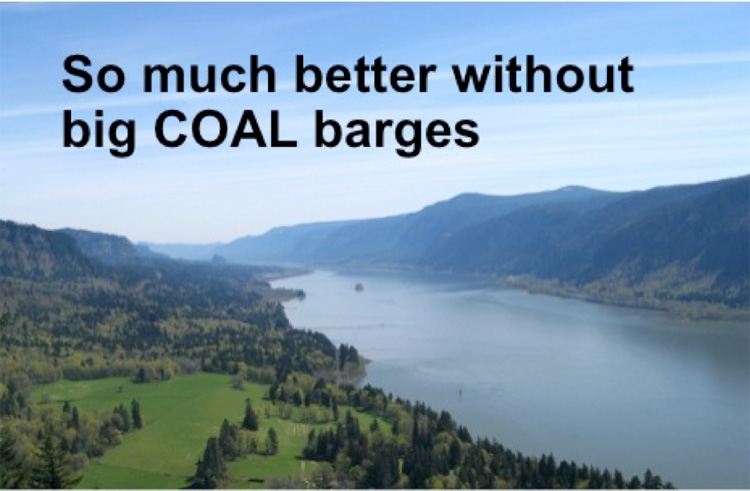 Stay tuned to our Visual Story Lab for more on visual communication.