“People of color are most affected by climate change. We experience the ecological devastation directly. We live in dirtier communities, breathe dirtier air, deal with toxic waste and otherwise bear the brunt of poor environmental decisions. Yet, when we think about engagement around climate change, people of color are missing from the conversation. Our people are passionately involved in immigration and mass incarceration because they see it as a matter of survival. Well climate change is also a matter of our survival, but the story around climate change is not compelling. We urgently need to change the culture in order to change the policy.” – Favianna Rodriguez, Executive Director, CultureStrike

Inside the tent and outside the tent, who’s at the table, who’s coming to dinner, who’s invited to the party and who’s not. As change agents, we find ourselves using these phrases over and over again in conversations about social justice. In doing so, we create a dichotomy of internal versus external.

These phrases evoke the notion of an imaginary gatekeeper who determines who gets into this coveted space and who must wait outside. Communities of color have historically been excluded from social movements, even though the issues at stake have large and lasting impacts on the survival and wellbeing of our communities. One has to wonder, why are we waiting in this line? What if we “owned the club”? When it comes to mainstream climate movements that rely on the “expertise” of scientists, policy analysts and elected officials, rather than waiting around to be invited to the right party, we need to grow our own spaces.

This notion was the driving force behind a new social media campaign co-created by Resource Media and CultureStrike. Through this partnership, #ClimateWoke emerged. It aimed to change the narrative—to bring together racial and social justice communities to realize that climate change doesn’t impact everyone equally; it’s communities of color, immigrant communities, low-income families, and communities bearing the brunt of mass incarceration who feel the harmful impacts of climate change first and worst.

Resource Media played a key role in developing the concept and communications plan for rolling out #ClimateWoke. We coordinated with the community-based nonprofits to introduce the concept, helped broadcast art sessions led by community groups to create banners and protest art, advised on the campaign’s multicultural aspects, developed creative concepts in partnership with CultureStrike, and supported project management wherever possible. 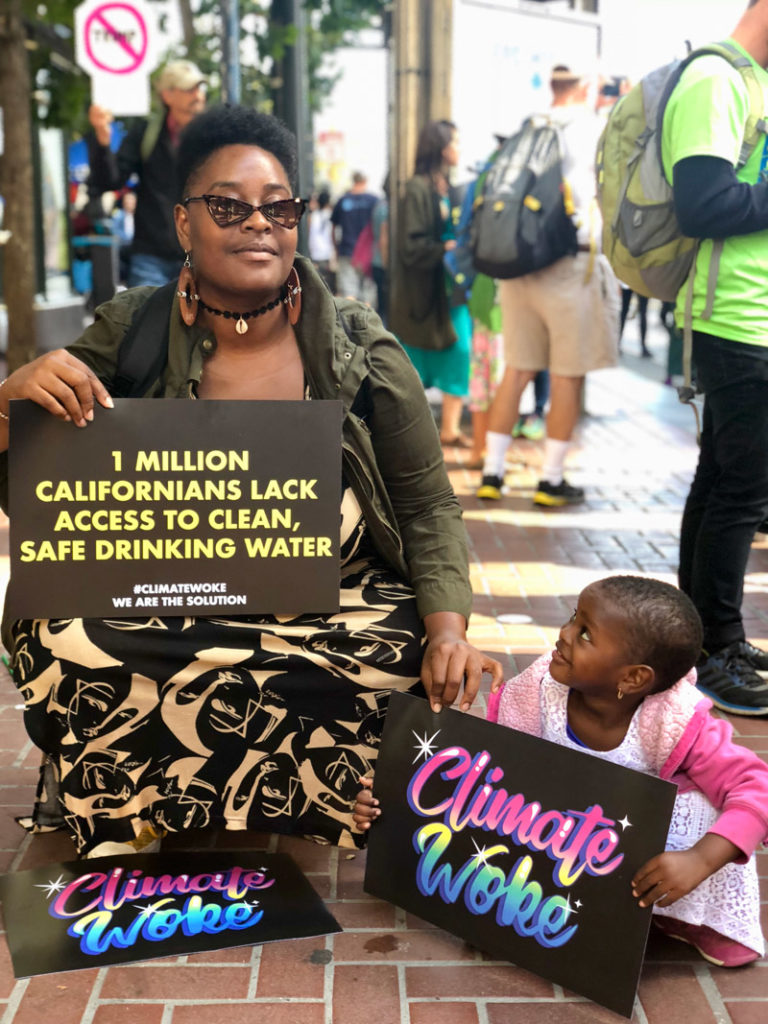 A mother and her small child are holding up Climate Woke signs that say: “1 million Californians lack access to clean, safe drinking water”

As a group, we identified a core organizing principle for our narrative-building work: building power among communities of color in support of climate justice. We realized that it was important to establish this long-form narrative prior to rolling out the campaign, so that our audience could understand and approach climate change as a racial justice issue:

The connections between climate change and so many other social justice fights are painfully clear in this moment. We now have incarcerated people, including incarcerated youth, fighting out-of-control wildfires; we have immigrants who harvest our agricultural bounty dying of heat illness as temperatures rise; and we have a vicious housing crisis that forces low-income families to live in communities that corporations have treated as dumping grounds for toxic waste and pollution. –CultureStrike team, as published on Medium.com

We also wanted to change up the representation of the default image of “climate leader” from traditionally educated white experts to the many Black and Brown folks fighting for climate justice in their own communities. “ClimateWoke is not just waking up to the fact that the climate is changing,” says Refugio Mata, senior program director at Resource Media. “[Instead, it’s about] how white supremacy, even in the climate movement, has led to the marginalization of communities of color.”

“Multicultural communications work is not always done across racial lines but rather focuses specifically on speaking directly to people of color,” says Sian Wu, managing program director at Resource Media. This is not to exclude white or wealthy people from the campaign’s messaging; rather, it’s an attempt to overleap specific barriers that have been put in place by mainstream environmentalism that narrowly define “expertise” and block people of color from accessing clean economy jobs, participation, and influence.

Multicultural communications is not just about identifying barriers, but also about finding ways to resonate within specific cultural groups. So as a group we realized that aesthetics and visuals of #ClimateWoke were essential to making climate justice a more accessible movement for young people of color in California. The #ClimateWoke hashtag links racial justice and climate change issues, inviting people of color to reimagine their identity as part of a nascent movement. This means not merely being invited by gatekeepers of power as an afterthought but rather becoming leaders of the movement and receiving credit for the labor we’ve already contributed. We wanted to create something that awakened more engagement with climate issues among a progressive, politically active community who already care a lot about racial equity and social justice, but who may not identify as much with climate change as a driving, defining issue for their communities.

The bright, neon colors and broad strokes of the #ClimateWoke logo’s typography, as designed by CultureStrike founder/artist Favianna Rodriguez, are influenced heavily by airbrushed graffiti. It is a nod to 90’s styles trending again at the moment with young people of color, and we also made it open-source, allowing street artists to easily reproduce it themselves.

The timing of this campaign revolved around the Rise for Climate March on Sept. 8 in San Francisco, ahead of the Global Climate Action Summit 2018 (GCAS) in San Francisco. San Francisco’s march was one of more than 900 actions in 95 countries worldwide urging climate action. GCAS was a global gathering on climate change solutions hosted by Gov. Jerry Brown (CA) that was disproportionately attended by white male business leaders, executives, investors, scientists and policymakers in the clean economy industry. We focused on inserting environmental justice voices and concerns into online conversations and content leading up to and through the summit.

The Rise for Climate march was led by indigenous leaders. At the march, we distributed #ClimateWoke signs and t-shirts, adding to the excitement of the day. We met people like Satimah, a woman of color from Oakland who attended with her toddler. Satimah said of the campaign, “We need to all stay #ClimateWoke: for her, for her kids, and for me, right now.” 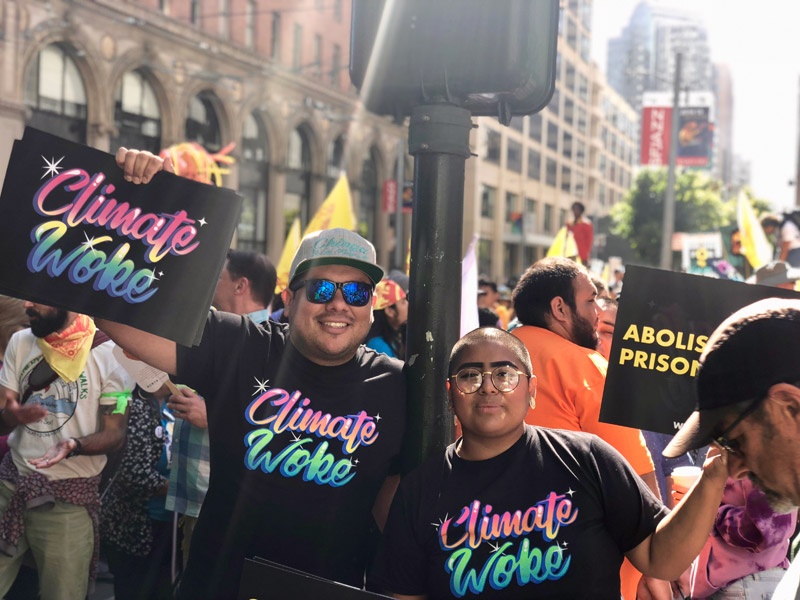 While plenty of other climate campaigns are working to enact certain policy, build political backbone, adopt technologies or increase funding, #ClimateWoke was designed as a base-building campaign. It is about reaching more people in a way that is relevant to them and cultivating enduring interest in climate change—an urgent yet long-term fight. After rolling out the campaign on social media and at the march, we were able to track how people engaged with the campaign.

Beyond these stats lies a bigger story, and even bigger potential ahead.

Our longer-term goal—still a work in progress—is to reframe climate change in a way that sparks curiosity and engages communities of color in California and beyond. We want to situate grassroots, community-led solutions as the central driver of climate action, creating a sense of urgency and building power leading up to future elections and other opportunities for policy change.

One traditional way of responding to climate change is through the lens of personal responsibility. We ask people to change their personal consumption behaviors; for example, drive less, buy reusable goods, turn down the thermostat, etc. While these efforts are laudable and helpful, these actions alone won’t get us to where we need to be. This model also relies for the most part on access to a middle-class or wealthy lifestyle with free time to plan out and incorporate changes, available funds to install and maintain energy-efficiency upgrades, and community support in validating these choices. But how can we ask low-income people and communities of color to allocate a larger share of their income toward these changes when their footprint is already so low and they have fewer resources to make it happen?

We need systemic solutions to eradicate barriers preventing low-income people and communities of color from equitably participating in and benefiting from climate programs. White-led groups with the power and resources to dominate climate work have done so for far too long. With CultureStrike and our other environmental justice partners, we are encouraging people to support community-led solutions created by and driven by communities most impacted by pollution. Real climate change solutions don’t leave those most vulnerable behind—otherwise they are false solutions. We all need to stay #ClimateWoke given the urgencies of our climate crisis, and the urgency of the need to lead from our own spaces.

Find out more about the organizations doing this work, and how to get involved: