Lessons from the Empire State Building

In 2009, a team of workers set up a secret workshop in an unmarked room on the 5th floor of the Empire State Building.

In the dark of night, well after the throngs of tourists had departed, the workshop leapt into action.

Workers dashed through the building’s 100 floors, each night removing 75 double-hung windows. Back in the workshop, workers disassembled the windows and installed spacers between the glass panels, into which they injected a mix of heavy gases. South-facing windows received a special UV-blocking glaze, and north-facing window were treated to allow more radiation to enter. The following evening, another 75 windows came down, and the previous evening’s “superwindows” were installed in their place.

The ritual repeated itself each night for over a year, until every one of the Empire State Building’s 6,514 windows had been remanufactured.

What sounds like the beginnings of a plot twist in a Robert Ludlum novel is in fact just one chapter in the remarkable story of a deep retrofit of the Empire State Building. And it’s a story that illustrates an important finding from recent research into the motivations and views of building owners when it comes to energy efficiency investments and deep retrofits: Timing is everything.

Today, four years after completing its deep retrofit, the Empire State Building is on track to use 38 percent less energy than it did in 2008. It has massively increased in value thanks to its ability to command higher rents from fewer tenants, and it has become an educational vehicle for millions of visitors who learn about the building’s green features on their way to the iconic observation deck.

With a payback period of just over three years for the energy efficiency investments, it’s both a sustainability and business success story. In the above image, Clay Nesler, VP for Corporate Sustainability for Johnson Controls, explains how the avoided cost of adding new chillers through reduced cooling loads proved to be the lynch pin for building a successful financial case for a deep energy efficiency retrofit in the Empire State Building 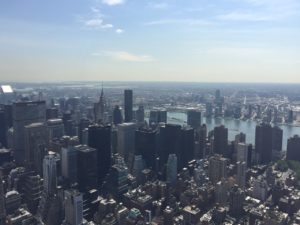 The iconic view from the Empire State Building’s observation deck.

And, as explained by Clay Nesler, Vice President of Corporate Sustainability for Johnson Controls—the project’s energy service contractor—in a recent tour of the retrofit,  the numbers only penciled out because the building owner was already considering major investments into the building’s cooling systems. By cutting energy use by over a third, the owner could avoid installing an expensive new cooling system. This freed up funds for the energy efficiency upgrades, making the whole venture make financial sense.

This notion – that critical intervention points in the life cycle of a building are the best time to make the case for energy efficiency improvements – was a key finding from recent market research examining the views and perceptions of building owners and managers in the Pacific Northwest and Philadelphia region.

The research demonstrates that equipment replacement, changes in ownership and building “repositioning”– for example, transitioning a building from a class B to class A property – are ideal times to approach owners and managers  about energy efficiency upgrades.

As with the Empire State Building, when owners are already considering large investments in a building, energy efficiency can be best positioned as a strategy to increase value and lower operational costs.

For advocates seeking to persuade building owners to embrace energy efficiency, it turns out that knowing when to make the case is just as important as knowing how to make the case.

Other findings from the research include:

Given that buildings are the single largest contributor to climate change, what happens in the building sector over the next few decades will have major implications for our ability to transition to a low-carbon economy. This research, which reflects interviews and focus groups with 75 building owners and managers, is therefore a valuable tool for those working to persuade building owners to be part of the solution.