Here’s the scenario: Washington State, like many states, uses something called fish-consumption rates to set water quality standards. The idea is to start with the average amount of fish people eat, and then figure out how clean the water needs to be in order for someone to eat that amount of fish without putting themselves at risk. If you assume the average consumption rate is very high, then the water needs to be very clean. If you assume a small amount – meh.

So it’s a big deal that Washington is trying to dramatically increase the consumption rate: from 6.5 grams/day to 175 grams. If successful, pollution standards would have to become a lot tougher. It would be a major win for all of us working on health and environmental issues in the Puget Sound region. 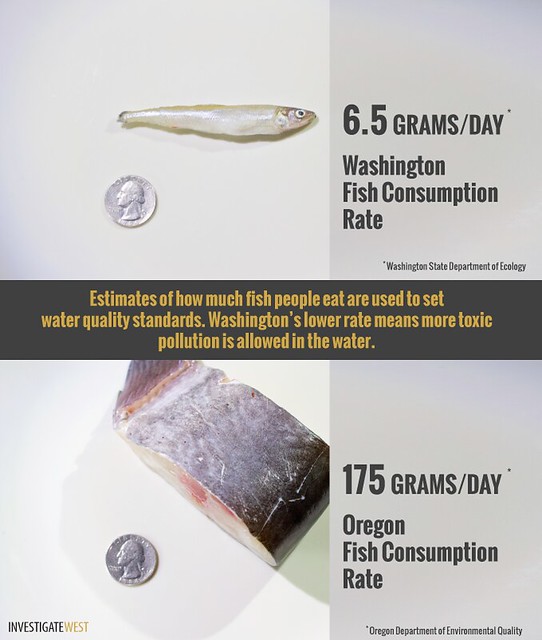 In the coverage last week, reporters have valiantly tried to explain how the policy works: that this is about water quality, not rules about how much fish is safe to eat. It gets confusing. I know the policy better than the average person, and I was still a little confounded by their explanations – until I saw this graphic from Investigate West. Even though it’s over a year old, it does a better job than anything else of articulating exactly what’s at stake. Here’s why:

While I love the simplicity of the graphic, I think it could have been even more effective if it visually connected water quality and fish consumption to human health. A punchy headline, too, would help tell the story and would likely make the entire image more shareable via digital and social media channels.